Edge and Becky Lynch are two of the biggest names currently in WWE. Both were part of SmackDown before the WWE Draft 2021. Something that recently happened between these stars has got the wrestling world buzzing.

Currently, Edge is involved in a heated rivalry with Seth Rollins. On the 15th October episode of SmackDown, Edge threatened Seth Rollins that he could invade his house and confront his wife, Becky Lynch.

WWE posted a tweet regarding this promo, and Becky Lynch replied with a photo. The photo was from a 2019 episode of SmackDown, which featured her and Edge in the same ring.

It seemingly signified that The Man is ready to confront the Rated R Superstar anytime he wants. We may see an update on this story in the next episode of SmackDown.

What happened between Edge and Becky Lynch in 2019? 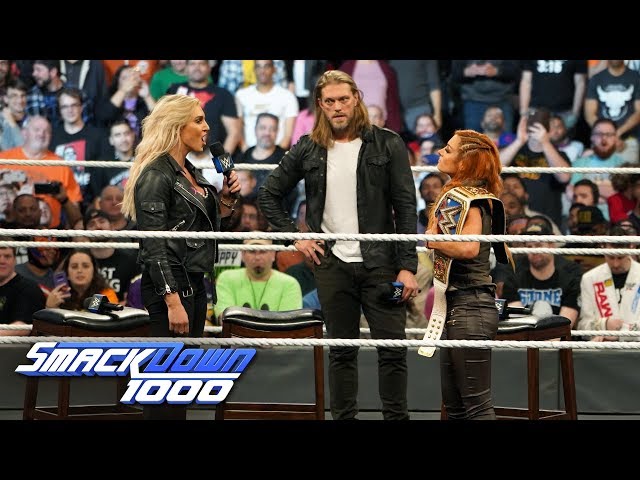 Becky Lynch was involved in a heated Twitter feud with Edge and his wife, Beth Phoenix. The Twitter rivalry included the couple insulting Lynch on various occasions, and Lynch coming back with a fitting reply. This interaction was the reason Seth Rollins and Becky Lynch’s real-life relationship was revealed publicly.

On the 1000th episode of SmackDown, Edge and Becky Lynch were featured in a promo. The WWE Hall of Famer tried to convince Lynch that she had ruined her friendship with Charlotte Flair just for a title belt.

Lynch brought up the fact that Edge had an injured neck and couldn’t wrestle, and told him to leave the ring. Flair and Lynch brawled at the end of the segment while Edge had a sad look on his face.

As of now, Edge is set to face Seth Rollins in a Hell in a Cell match at WWE Crown Jewel 2021. The build-up to this match is incredible, with each wrestler talking about each other’s family. Rollins even visited Edge’s house as a part of this rivalry.

Edge and Rollins will both move to RAW after Crown Jewel, meaning their rivalry may continue for a few more matches. One thing’s for sure, we will witness some of the best matches of the past few years if this brilliant feud continues.