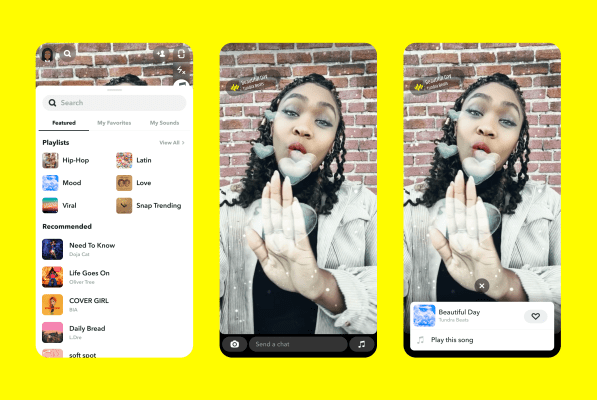 Snapchat has inked a deal with Sony Music Entertainment to include its artists’ music in the app’s Sounds library. The company also revealed that it’s creating new AR music lenses. Soon, Snapchat will feature “Sound Lenses” with a pre-selected song embedded into the lens, a lens that transforms pictures of anyone to appear as if they are singing a song, and “Cameo Sound Lenses” that apply visual effects.

The company says that with more than 200 million users engaging with augmented reality on the platform every day, these new “Sound Lenses” will create a more immersive music experience for its users. Snapchat has been leveraging AR capabilities in several different ways over the past few years. Most recently, the app announced several updates to its AR-focused Lens Studio.

As for Snapchat’s partnership with Sony Music Entertainment, it comes at a time when access to unique sounds is becoming a competitive advantage for social apps. With this latest launch, Snapchat users will be able to include fully licensed Sony Music artists’ music in their snaps and send them to other users or post them to Snapchat Spotlight.

The new partnership comes two weeks after Snapchat inked a deal with NBCUniversal to give users access to licensed audio clips from various NBCU TV shows and movies. It’s worth noting that Snapchat also has partnerships with numerous studios and companies within the music industry, including Universal Music Group, Warner Music Group, NMPA, Warner Chappell, Kobalt, BMG and more.

Snapchat has been looking to compete with TikTok, which has popularized short-form video sharing with posts set to music from a large catalog. For Snapchat, giving users access to different sounds is an important part of its efforts to compete with TikTok. Last year, the company launched Sounds, a music-powered feature that allows users to set their Snaps to music.

Snap, the parent company of Snapchat, says that since launching Sounds, videos created with music from Sounds have resulted in 521 million videos created and 31 billion views. But Sounds aren’t just used to help fuel Snap’s TikTok competitor. Since Sounds’ launch, nearly 45% of all Snapchat videos created with Sounds (across sends, posts and saves) were sent via direct message.

The new catalog of Sony Music Sounds will be made available to Snapchat users globally, across iOS and Android.